About the MC Scow
By Gary Sayia

The MC Scow was developed in the late 70’s. It is cat rigged and 16 ft long; basically a small C Scow. It has grown to be one of the biggest classes in the U.S. They can be sailed either single or double handed. There have been over 2525 boats built over the years and if in reasonable shape, are all competitive. The MC has 2 bilge boards and a single rudder. There are controls on each side of the boat that handle all the critical adjustments. You can step the mast singlehandedly. The beauty is that if you weigh less than 175 lbs and it starts to blow, you can add a crew and compete. It is stable. Jump on it and don’t worry about turning over. The MC is responsive, fast and a joy to sail. 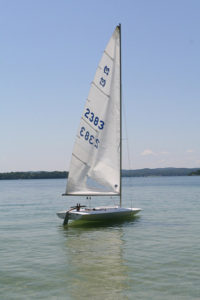 WOW – Women on the Water
by Gail Dunn

The future of getting more women skippers and crews out on the water is looking very positive. We now have a very enthusiastic group of young women who will be out on the water every Wednesday, weather permitting.
While these gals are relatively new to sailing, they are young, athletic and willing to learn. They need our help and encouragement and we need them as our future of woman on the water at BHYC.

About twenty – five years ago we had a large attendance of woman out on the water in Sandpipers on Wednesdays, while on Mondays we had The Monday Morning Blues in Blue Jays.

The decline in sailing for woman today is due mainly to the large number of woman now in the work force ,as well as, the busy structured youth programs at our club. There is little time for Mom!!!!! Our new group of young girls wants to understand ” the ropes” so they will be able to better communicate with their children around the dinner table and help them out on the water.

The Bay Head Yacht Club was established on September 8, 1888 “to promote yachting and rowing and to foster athletic sports upon the water”. Bay Head was then emerging as a popular seaside resort that attracted prominent families from Philadelphia and New York. The first clubhouse was built in 1889 on pilings at the head of Barnegat Bay. The modest building was surrounded by marshes and reached from land by boardwalks. In 1893 the clubhouse was moved 100 yards east to its present location and in 1928 the current clubhouse was built to accommodate a growing membership. Following Hurricane Sandy in 2012, the 1928 clubhouse was raised 10 feet and completely renovated.

BHYC members were active participants in early sneakbox and catboat racing on the shallow waters of Barnegat Bay. In 1914 the Club was a founding member of the Barnegat Bay Yacht Racing Association. Bay Head Commodore John V.A. Cattus was elected the BBYRA’s first commodore. That summer O.G. Dale of BHYC won the first BBYRA championship in his 20’ Sneakbox “Arran”. Since then BHYC sailors have won 191 championships in classes ranging from E Scows to Barnegat Bay’s splendid wooden A Cats.

Bay Head has had many prominent sailors in its history including Slade Dale, winner of the Cruising Club of America’s Blue Water Medal for 1929 for a cruise to Cuba and back in “Postscript”, a 23’ cutter designed by Dale himself. Also Sam Merrick, champion E Scow sailor, who managed the U.S. Olympic Sailing Team to its best showing ever: an unprecedented three gold and four silver medals in 1984. Sam was honored later that year with US Sailing’s most prestigious award, The Nathanael Herreshoff Trophy.

Today the Bay Head Yacht Club has a vibrant membership of 800 families that enjoy active sailing, tennis, and social programs. The Club is proud to continue its leadership in the sport of sailing through regularly hosting regional and national regattas.

Below is an article that Doug Love sent to me shortly before his passing. Doug was a longtime friend of John Callahan and the Callahan family. He was a pioneer in the M Scow and Lasers fleets in the 60s and 70s, and he later was involved with John Callahan and Peter Wright in the E Scow fleet. Doug Love had the perfect combination of mental and physical strength which he applied to sailing. – Scott Callahan

The biggest development in boat speed promotion in recent years has been to
maintain a) an absolutely constant angle of heel, and b) a stationary rudder.
Simultaneously, the skipper is still continuously aware of the position of telltales
both on shrouds and sails. Indeed, it is too easy to become overly fixed on the later.

Late in my career, I discovered yet another input which is the boat’s bow wave.
Though it is necessarily randomly impacted by waves large and small, I found
an attitude which best signaled that we were ‘in the groove’. My confidence in this
device was subsequently borne out when crewing on a A-Cat. I experienced the feeling that the best position to ‘feel’ boat speed was at the chainplates! This gives an opportunity for occasional commentary as between the jib man and helmsman in pursing optimal boat “attitude”.