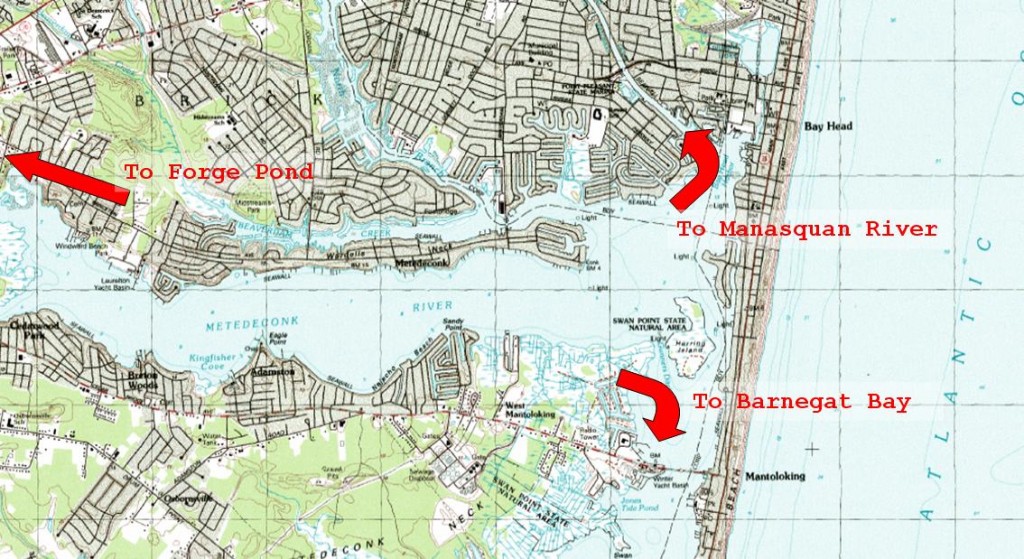 The River flows from its North (20 miles/32 km long) and South Branches (15 miles/24 km long) to their confluence at Forge Pond, where the river widens (up to just over 1 mile/1.6 km) and flows southeast for 6 miles/9.7 km into Barnegat Bay.  The river emptying into the Bay. It also shows that prior emptying into the Bay, the river twice widens into two distinct areas. These two areas create a convenient division for separating the fleets competing in the Callahan Regatta. In the past, the A Cats and the M Scows have raced on the western portion and the Sanderlings and Sandpipers on the eastern portion.

On a typical summer day, the wind is light from the northeast in the morning and stronger from the southeast to south in the afternoon. Since the wind—the afternoon ocean breeze—fills in from East to West, the Sanderlings and Sandpipers are apt to get the stronger wind first. The rationale here is that they need the wind more than the A Cats and the M Scows. As a rule when tacking up wind it pays to be near the windward shore. The middle is to be avoided except in steady wind. Moreover, the river is narrow enough, even at its widest, such that it pays to look for wind on the water and position one’s self accordingly. Caveat: the A Cats with their tall masts can catch wind aloft before it has reached the surface. A rule of thumb: river is not given to waves, so that tacking upwind, pinching—one says feathering—can be advantageous. But don’t be
greedy.